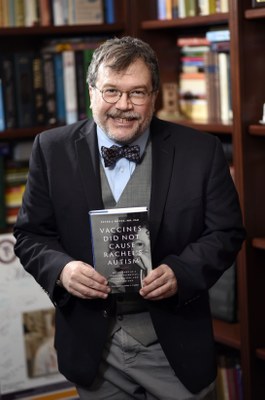 Director of the Texas Children’s Center for Vaccine Development (CVD)

In 2017, Fortune magazine named him as one of the thirty-four most influential people in health care after he emerged as a national thought leader on the Zika epidemic in the Western Hemisphere and globally. He was among the first to predict Zika’s emergence in the United States. He served on infectious disease task forces for two consecutive Texas governors.

As both a vaccine scientist and the parent of a child with autism, Hotez has ardently and publicly opposed the antivaccine movement. He often appears in print and broadcast news media, including BBC, CNN, Fox News, MSNBC, the New York Times, USA Today, the Washington Post, and the Wall Street Journal.

His research team is leading policy efforts around a group of chronic and disabling conditions known as the neglected tropical diseases (NTDs), the most common afflictions of the world’s impoverished. The team helped develop the concept of a “rapid impact package” of NTD medicines, which has reached 250 million people in Africa and Asia; is working in Brazil and Mexico to develop vaccines for NTDs; and is helping shape policy around previously hidden NTDs in the United States, especially among the poor in Texas.

Hotez earned a doctoral degree in biochemistry from Rockefeller University and a degree in medicine from Weill Cornell Medical College. Hotez held postdoctoral positions in molecular parasitology and pediatric infectious diseases at Yale University School of Medicine and served on the faculty until 1995. In addition, Hotez served as professor and chair of the Department of Microbiology, Immunology, and Tropical Medicine at George Washington University.

He has served as president of the American Society of Tropical Medicine and Hygiene, and he is founding editor-in-chief of PLoS Neglected Tropical Diseases. Hotez co-founded the Global Network for Neglected Tropical Diseases to give hundreds of millions of people access to essential medicines. He has written more than 400 original papers and two books: Forgotten People, Forgotten Diseases and Blue Marble Health: An Innovative Plan to Fight Diseases of the Poor Amid Wealth.

A Hagler Fellow in the Class of 2019-20 at Texas A&M University’s Hagler Institute for Advanced Study, Hotez collaborates with faculty and students in the School of Public Health and the College of Veterinary Medicine & Biomedical Sciences.